Compliance with driver rest periods is often breached and sometimes not the intentional fault of the driver. It is important to plan your trip for the purposes of taking the necessary rest stops so that you can comply with truck driver log book rules. 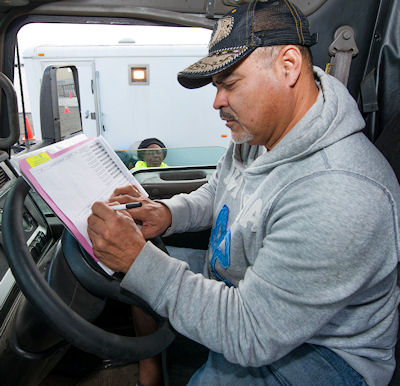 The regulation that seems to give truckles the major concern is defaulting on the prescribed 7 hour continuous rest period and on occasions through no fault of theirs.

About an hour and a quarter out of Lithgow, at 10.30am he was stopped by an RMS inspector and detained for an hour and a half until 12.00 Noon. During that period the inspector went all over the truck while my client twiddled his thumbs. Was he resting? Well he wasn’t driving or working, but that 1.5 hrs had to be registered as a work period in his diary.

When the inspector completed his “inspection”, my client had a further 45 minute break and continued on to Lithgow to be loaded in time for his return journey later. He arrived at 2 pm and logged off his diary. He then took his rest until 9pm and set off on his further journey.

His diary was requested about two weeks later and handed in and he was later breached for non-compliance with the minimum rest period – critical breach – which carried a maximum penalty in excess of $16,000.00 and 4 demerit points.

What was his breach? Not taking the required 7 hour rest period in the 24 hour period. You see, by 7pm that evening he had only taken 5 hours rest even though he was still resting until 9pm. Interestingly, throughout that 24 hour period, he had also had two stops of 3 hours each, so he was not what we would call “fatigued” but fell foul of the legislation.

This matter had to go to court and I appeared for him. Following my submissions, the sensible magistrate quickly saw the injustice of the situation and whilst convicting him, disposed of it by way of a $500 fine.

There is no way you can cater for being stopped for a lengthy period by officious RMS inspectors or Highway Patrol; worse still, to be midway through your break at some lonely deserted truck stop late at night, only to get a knock on your cabin door and a check of your diary or your truck by some officious Highway Patrol Officer.

Owing to recent tragedies involving trucks, there is a current tendency to demonise truck drivers as “cowboys” and a view that they need to be brought to heel. People forget that just about everything that is delivered to us, whether it be food, furnishings, fuel and day to day necessities, are all brought to us by truck drivers who are often away from loved ones for extended periods ensuring deliveries that keep trade and commerce alive

Having said that however, in such a regulated industry, it is vital to ensure you work your hours in accordance with the rules. Don’t be caught out – these offences can not only prove expensive but also cost you dearly with demerit points and perhaps your licence. Remember to count your work hours from the last rest period in any 24 hour period.

If you require assistance with the various laws – whether as a Company or individual – call us at Proctor & Associates and we will be glad to assist.